the first time i saw her, she was literally dragging her feet on the road, heading home. must have had a real tough day. in the light of the dusk i couldn't see the expression on her face, but she must have been talking to herself. i tried to fast forward to when she would barge into her room and throw herself on the bed.

the second time i saw her was in the restaurant. she was with someone and i was with many people. they had preferred one corner table. and in the dimlit darkness i could gather, she wasn't beautiful. the waiter came out with two veg sandwiches. one was for me. the other for her. they were awful, the sandwiches that is. they were cold and tasteless and cold and tasteless. but thanks to them, we ended up with our first common disgust.

third time, saturday evening, in the temple. in the bright light i saw a serene face. lips din't move. so silent prayers. then i heard her sob, i heard her cry. i saw her break down. i waited there and saw her hold herself and walk past me.

the fourth time it was in a bookstore. her hair had settled into lose curls. strands of it kept falling on her face and she never gave up on tucking them behind her ears. no earings though. she held half a dozen books in her hands, like she was taking them home for dinner. ah, greed for the written word. for a brief insignificant moment my eyes met hers. for the one first time. she held my eyes in hers for one brief instant, and then let go.

our fifth was in a fish market. she was in faded jeans, torn jeans. my mind moved about with her like the usual. she looked totally out of place. someone was doing the fishing for her. she was meant to do the better of the jobs. observing. people watching. i caught her taking pictures. of everything in and around, of the absolute squalor. she has an eye for everything. 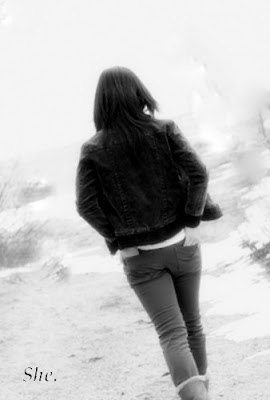 btw...while I was reading it, I had pictured an ending.....
Something like "I met her the seventh time. She was there sleeping contententedly.A needle in her vein was keeping her alive.She caught my eye for the second time. She looked pale. But she gave a faint smile. Probably she thought of the restaurant and our horrible sandwiches. Probably she wondered about the quizzical look in my eye when i saw her clicking photos in the fish market. Probably she felt embarassed of her pani-puri in the rain. I left, completely in love"

@ academically..
how wished there was no upper limit to that sweetness :P but nevamind..

yeah , guess this is where the reality sinks in :)

wd love to be her. read SHE by Haggard smtym.